As an atmospheric technician, your primary job is to maintain a safe and breathable atmosphere inside the station. As a member of the engineering department, you may also be expected to double as a Station Engineer if they don't know what they're doing in exceptional circumstances.

The primary threats to a safe and breathable atmosphere inside the station are:

Atmospheric technicians are essential to keeping the station alive and breathing, and consequently are ineligible to be Traitor.

Your supervisor is the Chief Engineer.

The bread and butter of an atmospheric technician. Gases can be found:

About 79% nitrogen to 21% oxygen is the standard air mix.

Like your fellow Station Engineers, you start with a full belt of tools. Atmospheric technicians may also have access to:

Atmospherics, sometimes referred to as Atmosia, is where most of the station's air handling machinery is located. Each station has a different atmospherics layout. While seasoned atmospheric technicians may have atmospheric layouts memorized, frequent useless station remodeling station engineering changes mean that it is more important to be able to quickly understand the layout of the station that you're currently working on.

A typical atmospherics layout is shown below: 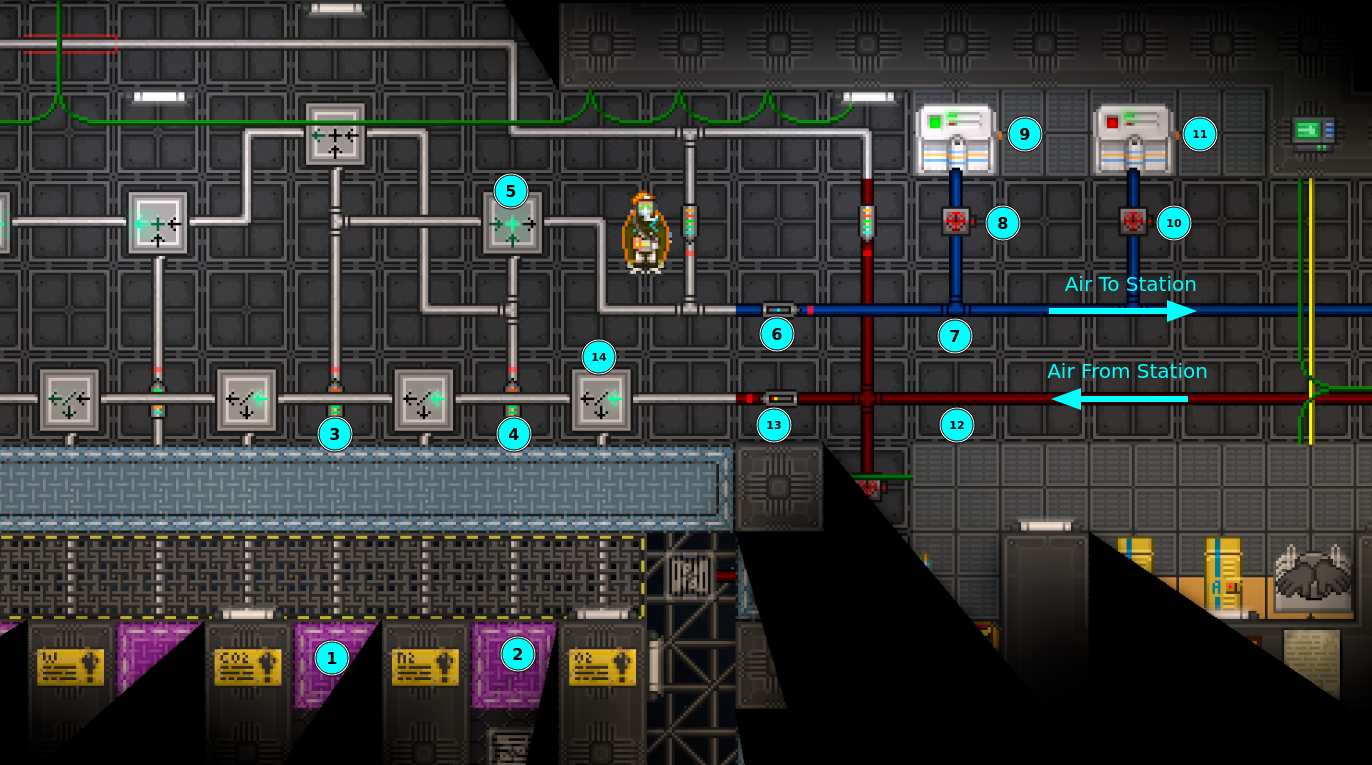 Holding chambers store a supply of gas for you to pump into the station when needed. Some stations come with gas miners that produce an unlimited supply of the mined gas. Walls and windows prevent gas from escaping to space; if the holding chambers are broken, then the gas inside will be lost.

Holding chambers may be labeled with the type of gas that they are designed to store.

Use pumps to move gases in and out of holding chambers.

The station's main air distribution loop, also known as distro, supplies the air vents that pump air into the station. It is usually colored dark blue to make it easily identifiable.

Setting up distro means to configure the layout to more effectively pump gases into distro. Specific steps to do so vary from station to station. Here is an example of setting up distro for the example above:

Waste, or the waste loop, is usually marked with red pipes and is responsible for removing waste gas around the station via scrubbers. These pipes start and end in atmospherics and are looped around the entire station. The main purpose of the waste loop is the ensure that harmful gases get removed from the station's atmosphere. Scrubbers will remove gas from the hallways and return it to Atmospherics where it will then be separated by gas filters into various holding chambers. Harmful gases will be deposited into their assigned chambers and the breathable air will once again make its way back to Distro and into the station to continue the cycle. 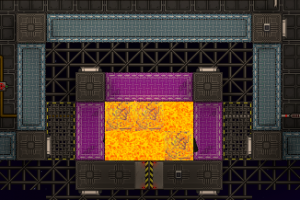 A mix chamber in use

The mix chamber is an empty holding area with its own separate loop of pipes and pumps in atmospherics. The mix loop is generally marked with brown pipes and the holding chamber can usually be found close to the external hull, separated from the station by reinforced walls and windows. There will be an emergency button nearby to vent the chamber to space if you need to dump your mix in case an accident arises, or you just wish to reset the chamber for a new mix. The mix chamber is here for you to experiment with different mixes, ratios, temperatures, and pressures while combining gases.

On most stations the Mix chamber will loop around to either the Supermatter chamber, to the distro loop, or back to the waste loop. It is generally a good practice to have your mix loop flow back into the waste loop to recycle any unspent gases. You should NEVER have the mix loop flow into distro unless you have a very good reason. Most savvy Atmospherics Technicians physically disconnect the mix loop from distro at round start to prevent an easy sabotage target or accident from occurring later in the round.

See the guide to Gases if you are interested to learn how different gases interact with each other at different temperatures and pressures. 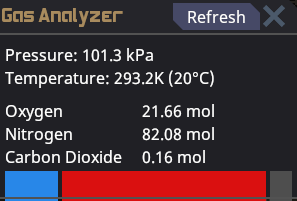 All gas can be quantified by its pressure, mole amount, and temperature. These three variables are closely related and directly affect one another. If you add more gas(# of moles) to a given area, the pressure will increase. Take the same amount of moles and lower the volume by using a smaller room and the pressure will be even larger. If you then heat up the gas, the pressure will be even larger still. The opposite is also true, less gas means lower pressure. cooling down gas will also lower the pressure. Volume, or size of the room, also plays a role in pressure. A larger area will require more gas while a smaller area will require less gas to reach the same pressure. using this knowledge we can see why space has a low pressure because the area and temperature are so low.

Moles are a way of measuring how much gas is present in a given area. A higher pressure does not always mean more of a gas in the given area. If you want to physically fit a larger amount of a gas in a specific area, you will need to cool the gas down to lower the temperature, thus lowering the pressure allowing more moles to fit inside the given area.

If you open a canister will 100 moles of air into a large hallway, you will hardly notice a difference in pressure. However, if you open the same tank in a small room the pressure difference will be greater.

The standard livable air requirements are about 20 moles of oxygen and 80 moles of nitrogen at a pressure of 101kpa and temperature of 20° Celsius. If you have less than 20 moles of oxygen present, your character will begin to gasp and take oxygen deprivation damage. If the pressure is any lower or higher than 101kpa, your character will begin to take brute damage in relation to the depressurization or overpressurization levels. If the temperature is much lower or higher than 20°C, you risk your character taking burn damage from the extreme cold or heat.

Explosive decompression, or space wind, is caused when a sudden low pressure or depressurization zone occurs and all the atmosphere flows from high pressure to low pressure. Space wind often happens due to a sudden hull breach or when the clown opens the external airlock. All personnel and lose objects in the area will be flung toward the low pressure area as if a gust of wind blows you towards the breach site, thus the name 'Space Wind' is dubbed.

Space wind is very deadly to any crew member not wearing hardsuits with internals. Space wind will often suck you far away from safety and toward the breach site. The damage you take from slamming into objects(and objects slamming into you) along with depressurization, lack of oxygen, and freezing temperatures will often quickly kill any unsuspecting crewmember who gets caught.

Space wind was disabled on 5/9/2022 until it is fixed or there is a better alternative. You will no longer be pushed around by explosive decompression or airflows.