As a Salvage Specialist, your job is to explore various wrecks from the space and retrieve any loot that you might find inside them. Use the #Salvage Magnet to pull in a wreck for a limited amount of time and don't get killed by space carps or your own idiocy! Be sure to bring a GPS and memorise current coordinates so that you do not get lost in space. 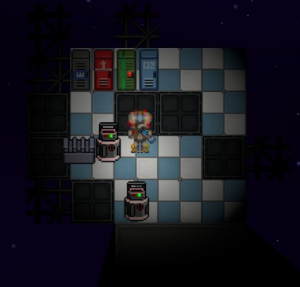 The location of the salvage is unpredictable. As such, you can use computers to help you locate it or simply jetpack out into space around the #Salvage Magnet and hope you see it.

Some maps will start you with a #Mass Scanner already built. If you don't have one, make sure to remind Scientists to get you a Circuit Board which you can then construct.

Alternatively you can use the visuals provided by the Cargo_Technician#Cargo_ShuttleShuttle Console.

The most crucial items in your job are the spationaut hardsuit, a breath mask and a breathable gas tank (oxygen for most species or nitrogen for slimes). You will not survive in space without those (though you can try if you're brave).

This console is used for pulling in salvage wrecks, which you can scavenge for loot. The salvage magnet pulls wrecks towards the general area it is facing, but that doesn't do much to narrow down the area. If the magnet is facing the wrong way or is installed too deep inside the station, then you won't be able to pull anything in.

The console can be interacted with at any point in time either to start it or get its status.

Before installing this too far outside in space, consider protecting it against meteors, aggressive space fiends and antagonists.

A computer that shows you a non-interactive map of the station, the shuttle location and any unidentified debris / wrecks marked as "Unidentified". Up is not necessarily north. You will see the computer's location (your location) marked in green.

A machine that takes ore that you have mined (with a pickaxe or mining drill) and when enough has accumulated enables crew to extract a full of stack of material. e.g. 30 steel plates. Can store steel, glass, plasma, uranium (but not plastic).