Hydroponics is the process of growing plants with added nutrients, but without soil. A Botanist performs this role.

First you will want to identify the machines around you that you will be using. Coordinate with the Chef to see if they want anything specific to be grown, otherwise, grow 2 trays of wheat, 1 banana tree and whatever else you feel like growing. Once you give your chef a bit to work with you can start growing plants for Chemistry (located in Medbay), the Bartender or simply to sell by Cargo.

The raw plant can be eaten for a small medical effect or poison. This effect can be boosted if the plant was grown with Robust Harvest. Alternatively, the plant can be processed into a more powerful medicine.

You start out with the default layout of where trays and vending machines are, however, if you so desire, you can change that. All you need is a Wrench which you can get from an Tool Vending Machine which can be found in the Engineering hallway. Holding the wrench, you just click on each plant tray, and then carry it into its desired position. Make sure to wrench it back down or it might fly away later. You do the same for vending machines and water tanks, etc. 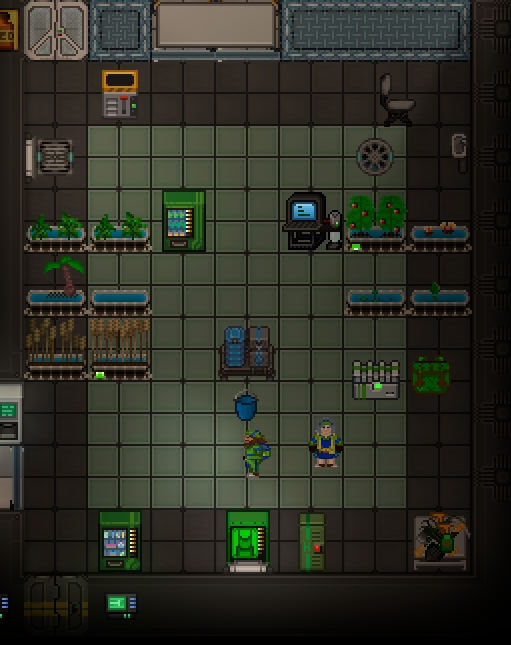 You can Examine a Seed to see its Yield and Potency.

Potency starts at 5 out of the Seed Extractor / Vending Machine but can be increased to 50 via 15u of Robust Harvest. Max potency is 100 and can only currently be achieved via mutations (e.g. via Unstable Mutagen). Potency affects the size of the plant and amount of chemicals it provides in the Reagent Grinder. For example highly potent medical herbs break down into more medicine and can be eaten for higher effect and higher number of bites. A higher potency in wheat equates to higher amounts of flour produced.

Yield differs by plant and can only be modified by mutation (e.g. via Unstable Mutagen). Yield affects the number of plants that will be harvested when a planted seed has grown.

Plants treated with Unstable Mutagen will undergo random genetic mutations. The more unstable mutagen, the more mutations but the higher likelihood the plant will die before harvest. Since many genes are essential to a plant's survival, randomly mutating them has a high probability of killing the plant. However, mutation is the only way to get some genes.

Plants can also be cross-pollinated with one another for a chance to transfer traits and other desirable properties. To transfer pollen from one plant to another, use a sterile swab. Avoid pollen cross-contamination! Different species can be crossed to produce hybrids. Since cross-pollination is also probabilistic, it may take several tries for you to transfer the traits that you desire.

To reset the plant's genetics, put its produce into a SeedMaker. To retain the genetics, instead use Plant Clippers

A Botanist can request crates from a Cargo_Technician that contain seeds. Most seeds will be available either in Hydroponics lockers or the SeedMaker. Some exotic seeds will need to either be purchases from Cargo or mutated.