Traitoring (specifically the "Traitor" role) involves completing a randomly assigned set of objectives while roleplaying as an antagonist employed by a hostile corporation. Your objectives can be viewed by opening your character information panel, which is by default hotkeyed to "C."

Note: Playing an antag role does not allow you to ignore Rule 1:

As a traitor, your primary focus should be completing your objectives. Simply griefing atmos and power or killing people unrelated to your objectives without actively pursuing them is highly discouraged.

Finding the location of these objectives is first step to completing them.

Memorize your codewords! Codewords are a set of random words shown under your objectives that are given to all traitors in the round. You can use them to discreetly identify yourself to other traitors, allowing you to work together. 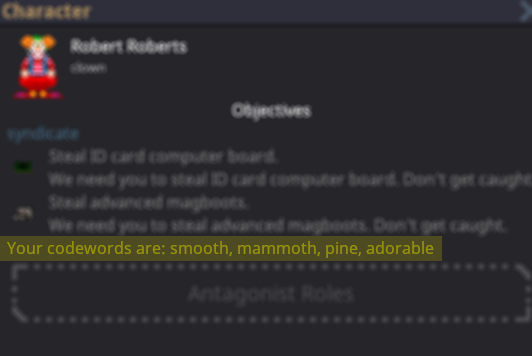 You can see your codewords and tasks by pressing C

Traitors and Syndicate Agents have access to an Uplink in their PDAs that allow them to purchase various items to help them complete their objectives. These items cost Telecrystals (TCs). Traitors start with 20 TCs and Nuclear Operatives start with 40. Telecrystals can be removed and inserted between PDA uplinks, allowing you to pool your funds with other traitors to purchase more expensive items. 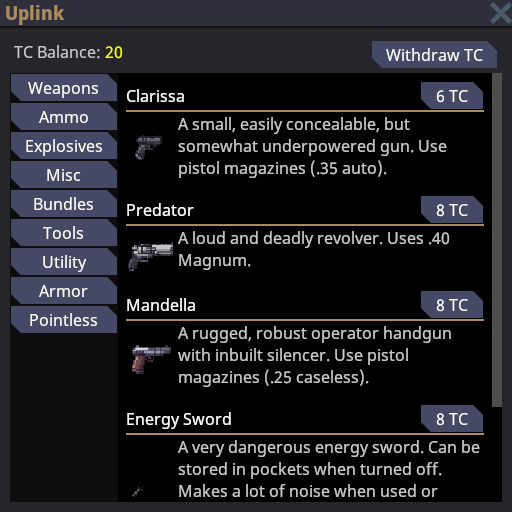 Traitoring provides a wonderful opportunity for creativity, but success always depends on the quality of planning and execution. When starting a round as traitor, make sure you understand what your objectives require, and ask yourself how to want to approach those objectives. If you have to steal the Nuke Auth Disc and an ID board, do you have to kill anyone? If you just need the Captain's ID card, do you need to destroy atmospherics or release the Singulo? Conversely, do you think you can get the Antique Laser Gun off of the captain without killing them? Can you take the Head of Security on in a firefight? The answers to these questions depend on your playstyle, skill level, and preferences as a player, but keep in mind that the goal is to (often) finish the round alive. The following will discuss tactics for assassination, sabotage, burglary, and manipulation.

Since the objective will tell your their job, you'll want to figure out where they will be spending their time on the station. Chemists tend to stay around medbay, but civilian roles like chaplain and librarian more commonly float around social areas like the bar. Once you've tracked your target down, consider where you want to kill them. Maintenance shafts are out of sight, but most people rarely just hang around in them. The main hallways are crowded so you'll have to neutralize bystanders and extract or gib the body so it doesn't get cloned. Finding the balance of convenience and opportunity relies on your knowledge of where the target will be.

Next up is your weapon. How will you acquire it? How effective is it? The Mandella kills quickly at point blank range, but too many stray bullets at longer range will give your target the opportunity to fight back or call over the radio for help. Explosions can devastate the entire room that a target is in, but it'll draw attention and possibly injure you. Poison takes more than a few seconds to take effect - will that be fast enough?

Assuming it all worked out, you will want to ensure the body doesn't get cloned. Hiding it in a locker is quick, spacing the body takes more time and risks exposure, and gibbing the body is messy and loud. If medbay is miraculously checking suit sensors, consider taking their jumpsuit somewhere else. Killing another player and getting away with it is all about preparation, opportunity, and execution.


Sabotage is effective for changing the behavior of people on the station, but one should always consider the consequences. If you feel the need to grief the entire station as much as possible just to steal a disk, you might want to spend more time strategizing or risk the ire of your fellow players, or worse, an admin. Sabotage can be very effective in surprisingly small doses if done correctly, and can backfire horribly in larger doses. Keep in mind that the more crippling your sabotage is, the more people will try to get it fixed faster.

Sabotaging power can be done centrally or locally. That is, you can sabotage power generation or power distribution. Power generation is usually distributed across the AME, Singulo, and Solars, so to cripple power station wide you have to hit all three targets hard and quickly. The AME can be blown up with explosives, overinjected with fuel, or deprived of fuel to hamper the station's power generation considerably. The Singulo is an extremely vulnerable target as it can be accessed from space and tampered with in a variety of ways. Simply turning off or cutting the wires to the emitters will power down the containment shield, allowing the Singulo to gobble up the station and nearby people before drifting into space. More subtle approaches involve disabling the particle accelerator or the radiation collectors. Solars is simply a matter of cutting HV wires or messing with the computers. Sabotaging power locally involves cutting wires going from substations to APCs or just destroying substations, and is a faster and more surgical approach that is also easier for the crew to fix. Sabotaging power will probably make everyone very angry at you.

Sabotaging atmospherics is either very simple or very complicated. You can either spend some time messing with mixtures and pressures to flood the station with carbon dioxide or plasma or just blow the whole works up. You can also ruin the air by opening tanks of CO2 and Plasma at max pressure. Sabotaging atmos will probably make everyone very angry at you.

Other forms of sabotage include spacing rooms, messing with doors, and blowing up or stealing important equipment like the cloning pod or cargo pad. If these disruptions are worth the time and risk they involve and end up helping you complete your objective, go for it. Otherwise, reconsider your strategy for other player's sake as well as your own.


Most objectives don't require violence. The Cryptographic Sequencer is a fantastic tool for gaining access to otherwise secure rooms and lockers. If you're light on telecrystals, a utility belt with a full set of tools can get you through almost any door, wall, or window. Swiping an ID with relevant access is great if you don't get caught doing it, and asking the HoP to let you change jobs can work on occasion. Breaking into lockers is usually time consuming, but a great trick to drag the locker in front of an emitter in maintenance and let it fire 4-5 times. Generally the hardest part of breaking in somewhere is avoiding being seen. You want to ideally spend the least amount of time possible in places where you shouldn't be, so staking out the layout before hand is recommended. While arguably excessive, putting on the right uniform or a different outfit can be the difference between being identified or not. Be sneaky, be bold, be quick.

Some traitors can lie and charm their way through all their objectives. Helping the crew and maintaining your cover will make you trustworthy and give you the element of surprise. Yell "Sec to Engineering" over radio before committing a crime on the opposite side of the station. Frame other people for crimes, start a worker's revolution, or assume another identity. SS14 is a roleplaying game, and the relationships you establish with other characters will affect the outcome of every round.