Although initially a trivial job, Cargo Department employees can amass any type of items with a little bit of luck, wits and time. Whenever anyone runs out supplies related to their job, they will turn to Cargo Department to resupply. If you're bored of sitting at the front desk and staring blankly at the corridor wall you can consider roaming the halls for junk to sell or liase with the Salvage team.

Remember, you can craft your own crates from the Craft hotkey. You can then open the crate by interacting with it, drop misc items onto, then close it by interacting with it. Some specialised crates you can purchase are lockable to those who have access (signified by a red or green light on it).

Remember that powergaming and revolutions are against the rules. If you amass resources for yourself and then don't have cash to buy urgent supplies like AME fuel your decision can single-handedly destroy the station. It is NOT your job to empty the station of everything worth selling/deconstructing. Hallways and maintenance tunnels may have things worth selling and are typically free-game. However regarding objects around a department, you may want to check with the Head of that Department first. Do not take objects that would reasonably be useful where they are. For example selling chairs and tables at a bar, a vending machine in the hallways or medical supplies from Medical can be annoying to other players (regardless of how much they are worth or how low your funds are). If low on funds, there are plenty of departments that can make you objects to sell (even Hydroponics can operate without power). Your role is to expect the unexpected and get funds and supplies BEFORE an emergency situation if possible.

Whilst it may be deemed fun to stock up on non-essentials, try to avoid prioritising such. If you do stock up on dangerous items like weapons, try to secure these in a locked crate / locker and possibly behind a welded secure door. If the power goes out, anyone with a crowbar can enter cargo and steal your supplies but you can make it harder for them to do so. If thieves cannot see the supplies as they are in a crate / locker, thieves won't know that they are there.

Your supervisor is Quartermaster. Remember to use the Radio to work closely with the crew. Many staff will be too busy to come in person to cargo so talk with them and deliver to them.

The heart of cargo; the cargo shuttle is what actually brings crates in. Controlled by the shuttle console often found in the Quartermaster's office this shuttle is often the most prized thing in cargo.

After it docks it's your job to unload it. Fortunately it comes with four sets of conveyer belts and blast doors to make unloading it as simple as a short push of a crate. Note that some objects cannot go under the blast doors (e.g. cannisters) but you can open the blast doors.

Once the shuttle is ready to undock you should quickly load anything you want to sell on to the pallets inside the shuttle, this allows you to keep the cargo funds high and keep orders coming. It should be noted you cannot sell anything living (and the shuttle will not recall if there is anything living on board, this includes everything from people to rats).

It is HIGHLY recommended that you do not damage, steal or even touch the components inside the shuttle as they can be fairly hard to replace and the shuttle depends on them to function properly. Some parts can be constructed whilst others can be salvaged.

You use the ordering computer to put in orders for the shuttle to buy from other stations. When you open the UI you should see a vast list of crates you can order; anything from dice games to firearms. When someone at the front desk asks for something it's your job to input what they asked for into the computer, preferably under their name. You can click on anything from the list to view its description and price. Just below that is the quantity you are ordering and the name of the person who ordered it as well as the reason it's being ordered. After you input what you want and are ready to get the cargo shuttle to bring it in, you need to accept the order, which will deduct the funds from the cargo-wide bank account.

The request computer is what you use to recall and call the cargo shuttle. It is rather simple to learn however if you screw up it can easily mess up several orders.

After you dock the shuttle and unload it you are going to want to recall it. Once you move the shuttle 250m away from the station you can press the recall button which will have replaced the call button. Before you can call the shuttle again you will have to wait a short time. Recalling the shuttle when there is anything on the cargo pallets will sell those objects. Try to avoid calling the shuttle then immediately recalling it as it will sell all the orders you just called in. At a loss. 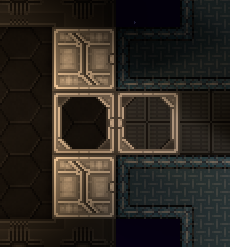 An example of how to use external airlocks. Note the nubs of the airlock pointing at each other.

This is what you use to actually pilot the shuttle. Once the shuttle is called it will appear a short distance out from the station. It's your job to locate the cargo docking ports and dock while avoiding punting the salvagers into deep space. (Usually, salvage is nearby cargo, which means that the 'unknown objects' that salvage draws in are usually nearby your docking area.)

Once you have unloaded the shuttle and have put all the items you wish to sell on, you will want to undock with the station and fly 250m away from it.

Left click the shuttle computer to take control of your shuttle.

External airlock [Docking] are used for docking with ships/stations that also have docking airlocks. Once you have two docking airlocks face to face, right click the docking airlock and select the Dock verb. If successful, the docks will both open and you will be attached to the other vessel.

IMPORTANT NOTE: Currently docking is finicky and will not always be airtight. Open with caution.

As a Cargo Technician, you start with an Appraisal Tool

. When you hold it in your hand you can left click on most things to find their value. Beware though as clicking on some items like carts, crates, clothing may instead move your tool into their inventory.

You can deconstruct most things on the station (but not all). For example closets cannot be deconstructed but chairs and machines can be. To deconstruct, you will typically need a screwdriver but sometimes a wrench, crowbar or wirecutters. Note that deconstructing most objects will greatly lessen the value. e.g. a chair may be worth 50 when pulled to the shuttle but deconstructed to 1 steel (worth 10).

If you're extremely low on cash, you can pester production departments (Hydroponics, Chef, Bartender and Chemistry) to make stuff to sell. Hydroponics can produce 4 aloe cream (100 per stack) per plant per cycle. Chef can produce breads / pizzas (cuttable at 50 per slice). These are produced simply with an infinite supply of free water (and power).

With your Appraisal tool, you can investigate how to turn raw materials into profit. e.g. 1 steel (10 value) can be turned into other things for more value e.g. 1 steel for a Wrench worth 40. Beware though, automated factories are NOT approved by CentCom as they involve a lot of entity movement and can cause performance issues with little benefit to the station itself. Instead of automated factories for lots of small objects, consider creation of less more complicated/valuable objects e.g. via Construction. However, you may need to pull the objects onto the shuttle (or build them onto the shuttle and unanchor them). e.g. 2 steel can be used to create a Rack worth 150. With a Circuit Imprinter, you can also turn a tidy profit however ensure you aren't producing tonnes of little objects. Also, before you rush and sell all the vending machines, consider that each can be restocked from your department. If all the vending machines are empty and theres no Bartender or Chef you are letting down the station by not restocking the food and drink machines. Remember selling things of value to players like vending machines and chemical dispensers is against the Server Rules.

Whilst prices are in a state of flux, here are some guidelines

If you are sitting on a tonne of money (more than 10k) and have no supplies stocked up, you are only doing half of your job. You will want to have a surplus of funds for emergency situations however remember you can only order supplies when the power is on, and the shuttle is working. Such will not always be the case.

Examples of items to stock up on: