Quartermaster's job is to not only supply the station's crew with what they need, but to also manage the entire Cargo Department and people working within it. QM's responsibilities aren't much more complicated than a normal Cargo Technician's, but you're expected to keep everything and everyone inside Cargo Department in check. Whether or not you are a proper department head is highly debated however due to you starting with a cape, command headset and command access it's likely most command structures will accept you as command personnel meaning you are expected to act like one.

Your underlings are Cargo Technician and Salvage Specialist.

As a Quartermaster, you get a fancy, brown cloak along with access to your own personal office, depending on the map. In your locker you might also find Cargo door remote, Supply Computer board and Supply Request Computer board. Make sure to hide those last three items well, you might need them in case of an emergency.

As mentioned above, your work does not differ much from a normal Cargo Technician's, but this does not mean that QM does not have a bigger say over the state of their department. Instruct or scold your department members whenever something goes wrong or they slack off on their job. Deny or approve any proposals of refurnishing cargo with questionable machines or objects. Make sure that cargo is operating smoothly enough that orders are processed and sent to the departments that requested them in a timely manner. 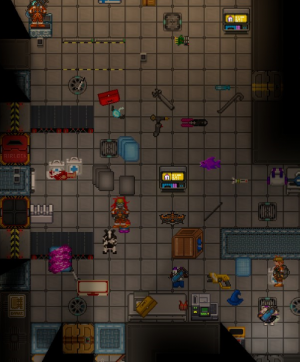 An example of a messy Cargo

You're required to keep your department in check, so everything remains properly productive and in the place it should be.

Make sure your workers aren't spending funds on pointless requests or items that they aren't supposed to own. Try to prioritize important requests (engineers requires building materials) over trivial ones (the clown wants 10 crates of monkey cubes). It's important to note that a lot of spare materials can be found via wreck salvaging, so make sure the Salvage Specialists are doing their job.

Don't give out salvage hardsuits to everyone - you might find more eventually, but you still have a very limited amount of them. These should be kept within the salvage lockers (where applicable).

Make sure to organize any spare items that might be making a mess on the floor. To get rid of any empty crates that you don't need, use a screwdriver to take them apart. Put whatever you don't need on tables or inside other crates.

Try to encourage your workers to properly stamp and fill out information and reason for cargo orders - those can be quite useful, even if you normally don't even glance at them.

Make sure to properly scold if your workers accidentally space the department by being clumsy with the airlocks - after all, it's a health hazard for other people inside.

Remember! As a Quartmaster you can demote and kick people out of your department if they don't listen or work against you, just make sure you have a proper reason.

Establishing Cargonia is a thing that might happen during a SS14 round. Cargonia itself is a term given to the Cargo Department once it decides to declare independency and completely cut itself off from the rest of the station. Station's Heads or the Captain might have a say in this, because you are essentially cutting everyone off from the possibility of resupplying. Keep in mind that you don't have to do it and you're even discouraged from doing so if you just wanna do a calmer round. Try out Bartonia instead (just set up a fancy bar inside your department, for you and your comrades).

A standoff between Cargo and Security

Keep in mind that a particularly ardent Captain might assemble a squad of security offices to storm your beloved nation, due to the fact that you've claimed a part of the ship as your own.

If you don't want Cargonia to seal itself off from the rest of the station, try encouraging your comrades to negotiate or trade with other crewmates to get the machines or facilities that they require, or try occupying their time by ordering them to build a shuttle or to refurnish the department into a fancy area of comfort.